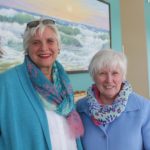 Our co-founders Wilma Goodhue and Joan Mullare are tireless advocates for individuals with developmental disabilities and have an impressive resume of accomplishments. Wilma is an active member of the Massachusetts Department of Mental Retardation Regional and South Coastal Area Citizen Advisory Boards, a Trustee of the Edwin Phillips Trust of Marshfield, MA, and a member of the South Shore Mothers Support Group. Joan also serves on the on the Massachusetts Department of Developmental Services Regional and South Coastal Area Citizen Advisory Boards and the Residential Committee of New England Village. She is also active in several mother’s support groups. Wilma and Joan were named Citizens of the Year in 2006 by the Norwell Chamber of Commerce and were awarded a certificate of Community Recognition by the Department of Mental Retardation at the State House in 2001. In 2014, Wilma and Joan were selected as two of the Most Influential Women of the South Shore by South Shore Living magazine.